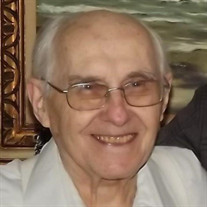 Edward P. Daugul, a long term resident of Eastpointe Michigan passed away peacefully in his sleep in an assisted living facility at the age of 100 on May 29, 2022. Befitting of a Veteran, Edward died on Memorial weekend. Edward was born to the Late Joseph and Anna Daugul, hard-working Polish immigrants who made their home in Detroit Michigan. Edward was the oldest brother to Helen(Jablonski), George and Frank who preceded him in death. He is lovingly remembered by son Michael and daughter Barbara. He is also survived by nieces and nephews Pat and Jerry Parko, the Jablonski children: Edward Jr, Kathy James, Nancy Nuell, James and the late Susan Bairley. Ed graduated proudly from Cass Tech High School and started at Chrysler Corporation just prior to WWII. He enlisted in the US Army Air Corps Aviation Cadet Program in 1942 and flew PT17 Stearmans, an honor he treasured, before being transferred to Radio Operator/Technician School. He was last stationed at the new McCook Field Nebraska until his discharge in 1945. While there, he played an instrumental role in the installation of the ground tracking radio beacon, using his skills to make it operational. Subsequently he placed, installed and flight tested aircraft radios in B17, B24 and B29 bomber aircraft before they were shipped overseas into combat areas. He married first wife, Bernice in 1944, mother to their children Michael and Barbara. Upon returning to civilian life he resumed work at Chrysler Corporation, first as a cutter grinder, then eventually as an inspector at the Eldon Axle division. Corporate downsizing saw him transferred to Mound Road Engine where, in 1992, as the highest of two in plant seniority, he was co-honored to start the production line for the new Viper V-10 engines. He retired in 1997 with his second wife, Sheila, until she predeceased him. He then married his third wife, Lorraine, who predeceased him in 2021. Ed was an avid bowler and enjoyed taking his family on annual vacations to many states until he could no longer travel. Always a hard worker, he took on a part-time job for a window and door company as an installer for Buffalo Air Tite during slow times at Chrysler. He was self-taught and became very skilled in auto repair, carpentry, plumbing and electrical installations. Although a stern disciplinarian, he taught his children some valuable lessons including how to be respectful of others, independent, hard-working and self-sufficient problem-solvers. He will be sorely missed by those who knew him. Interment will be in a private ceremony at Great Lakes National Veterans Cemetery at a future date. In lieu of flowers, donations can be made to Hospice in his memory. Those wishing additional information may contact the family through R.C. Aleks & Son Funeral Home.

Edward P. Daugul, a long term resident of Eastpointe Michigan passed away peacefully in his sleep in an assisted living facility at the age of 100 on May 29, 2022. Befitting of a Veteran, Edward died on Memorial weekend. Edward was born to... View Obituary & Service Information

The family of Edward Peter Daugul created this Life Tributes page to make it easy to share your memories.

Send flowers to the Daugul family.