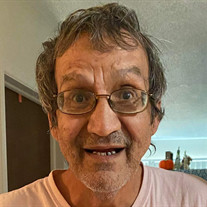 Richard Hernandez loved sports and could recite statistics, favorite players and games from throughout the years with little effort. On game days, it did not matter what sport was on, he could be found glued to his television set, watching the event with the keen eye of a coach looking to recruit the next big player. Mr. Hernandez, 67, and a native Detroiter, died Friday January 7, 2022. He suffered several medical conditions. He is survived by his brothers; David, Henry and Clemente (Maryann) sisters; Maria and Consuelo (Santiago). His sister, Gloria, mother, Emilia and father, Cristobal, preceded him in death. He is also survived by numerous nieces, nephews, great-nieces and great nephews in Michigan and aunts, uncles and cousins in San Antonio, TX. "He was a loving brother and just loved everybody," his sister Maria said. "He never forgot to show it to any of us." Mr. Hernandez graduated from Holy Redeemer High School in 1973 and spent the majority of his life living in southwest Detroit. He knew the neighborhood inside and out and enjoyed taking daily walks through it. he was a fixture at Our Lady of Mount Carmel Catholic Church in Detroit on Sundays. A lover of music, he could be counted on to shake a tail feather at family functions. He loved his family and delighted in seeing his younger relatives as they grew up. He could always be counted on to walk with them to the neighborhood store for treats, often jingling the change in his pockets to let them know a trip to the store was about to happen. A supporter of all of the local teams, Mr. Hernandez could often be seen sporting a University of Michigan jersey, a Detroit Lions t-shirt or a Detroit Tigers cap. He possessed an easy smile and sweet disposition. He lived with his sister Maria before his passing. Mr. Hernandez reunites in Heaven with other relatives and joins them as a guardian angel looking out for the family. In liue of flowers, contributions to the family would be appreciated.

Richard Hernandez loved sports and could recite statistics, favorite players and games from throughout the years with little effort. On game days, it did not matter what sport was on, he could be found glued to his television set, watching the... View Obituary & Service Information

The family of Richard Hernandez created this Life Tributes page to make it easy to share your memories.

Send flowers to the Hernandez family.