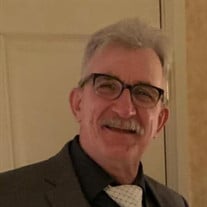 Rickey Moore of Lincoln Park, passed away on March 8, 2021 at the age of 67. Beloved husband of Linda A. Moore. Dearest father of Aimee (Steve) Kurilla, Eric (Renee) Demmer, Melissa (Ken) Milbocker, Rick (Rachel) Moore, Sara (Josh Scissons) Demmer, Amy (James) St.Onge, Theresa (Kevin) Holbrook and Adam (Breena) Demmer. Dear son of the late Oscar and Amy Moore. Loving grandfather of Logan, Madison, Ben, Gracie, Reagan, Isabelle,Ryan and Teddy. Also survived by many best friends and relatives. Rickey was a man known for his selfless nature and his sense of humor. He was a big kid at heart who was always quick to brighten the mood with his jokes, a man whose greatest loves in life were being a husband, father, step father, papa, and friend to many who he also considered family. He enjoyed many hobbies, his number one love was foosball, but he also enjoyed slot cars, fishing, spending time up north with Linda and his family. A social man who was always on the go. The loss of Rickey will leave a void in the hearts of those he touched.

The family of Rickey W. Moore created this Life Tributes page to make it easy to share your memories.

Send flowers to the Moore family.